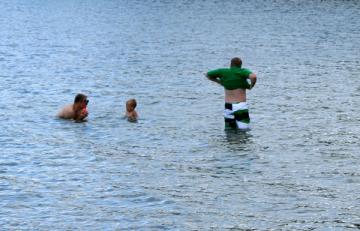 Silver Beach Provincial Park is a 130 hectare recreation and activity park located on the north end of Seymour Arm of Shuswap Lake sandwiched in between Dasnier and Bughouse Bays. To the east of the park is the community of Seymour Arm which, at one time in the late 1800s, was once a gold rush town named Ogden City.

A big part of the park is the large sandy beach neighbouring the protected Seymour River Estuary. During the summer months the park is a destination for many who enjoy camping, swimming, kayaking, canoeing, houseboating, birdwatching, scuba diving, fishing and water skiing.

The campground servicing the park is a smaller site with only 35 campsites. Amenities in the park include picnic tables, fire pits and pit toilets. A boat launch accessing the lake is located in Bughouse Bay in Seymour Arm. Some campers arrive to the park by vehicle and others arrive by boat.

The large sandy beach known as Silver Beach is surrounded by Douglas Fir and aspen trees providing shade and protection from the winds coming down off the lake for campers and beach patrons. Campsites are limited and all reservations are on a first-come first-serve basis.

Sightseeing on foot is best enjoyed along the 700 metre walking trail following the upper ridge of the beach. The trail provides lake and beach views plus quick access to the campground.

The Silver Beach Provincial Park is sometimes used as a base camp for river kayakers wanting to explore the Seymour River Paddling Route. Also, nearby is Seymour Falls which makes for a great day trip with waterfall views.