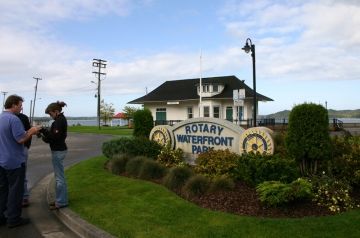 The Rotary Waterfront Park in Prince Rupert, British Columbia, Canada delivers spanning ocean views. It is great opportunity to be up front and personal with marine boats, yachts and barges. There are mountains and islands in the background, people exploring the coastline and seabirds off in the distance. All can be experienced from the shores of Prince Rupert Harbour when visiting the Rotary Waterfront Park.

The park is an ideal destination for bird watching and photography. It is a chance for casual walks and pleasant thoughts while sitting on one of the many viewing benches lining the shore. There other attractions within walking distance - the Pacific Mariners Park, the Museum of Northern BC and Cow Bay are worth a visit and close by.

Onsite is a carved statue of a Grey Whale and a calf, some floral planters, Lightering Dock just down the coastline, interpretive billboards and miles of railroad tracks leading to and from the historic Kwinitsa Railway Station.

The whale statue was carved by Hans Siniarrski and donated to the City of Prince Rupert in 1985 in celebration of the 75th anniversary of the community. Unfortunately, Hans passed away before the statue was completed and the whale was not resurrected until 1998.

The Kwinitsa Railway Station was constructed in 1911. At one time, there were 400 identical railway stations lining the railway tracks along the Grand Trunk Pacific Railway from Winnipeg to Prince Rupert, B.C. The structure is a museum today, with the harbour's railway history captured inside.