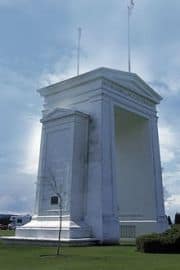 Detailed Description: The Peace Arch Provincial Park is a Canada/USA border crossing park situated on the 49th parallel located on Highway 99 south of the community of White Rock, BC, Canada.

The Peace Arch Provincial Park measures over 16 hectares. It covers both sides of the Douglas Border Crossing. However, over 9 hectares of the entire park is located on the Canadian side of the international border.

The Canadian side of the park includes a floral garden, art sculptures, grass lawns, a playground, a pond, sitting benches and a picnic day use area. There is a historic picnic shelter in the park which was built in 1948. It is the oldest shelter in the Canadian parks system.

On each side of the Peace Arch are engravings. On the Canadian side it reads, "Brethren Dwelling Together in Unity," and on the United States of America side it reads, "Children of a Common Mother."