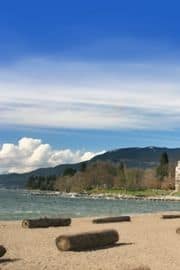 First Beach has a long history of beach activity. During the late 1800s and early 1900s the beach was a major gathering destination for events and social gatherings. At the time First Beach was the site of one of the premier bathhouses during that period.

Today, First Beach includes many of the services important to travelers when visiting a beach. There is a concession food and drink vendor, washrooms, change rooms, day use picnic area nearby and a lifeguard on duty between the months of May to September.

Some of the activities enjoyed at the beach include swimming, kayaking, canoeing, sunbathing and volleyball. Kayak rentals and storage units are available on site, as well as, there are two sand volleyball courts and a children's waterslide.

How To Get ToEnglish Bay First Beach

:
How to Get Here: The main entrance to the English Bay First Beach is off of Beach Avenue between Bidwell and Denman Streets. There is pay parking only and during peak times parking is limited.

english-bay-beach
PreviousNext
No reviews yet for English Bay First Beach.