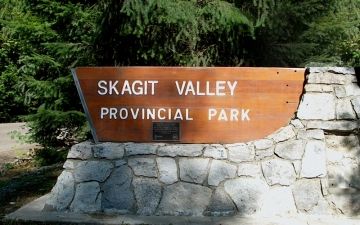 The park is a protected park, situated alongside other parks in the region, in a combined effort to preserve the wilderness green space and wildlife in the region.

To the east of the Skagit Valley Provincial Park is Manning Park and to the north is the Cascade Recreation Area. To the south, over the USA border, the park butts up against the Ross Lake National Recreation Area and the North Cascades National Park.

The Skagit River runs down the middle of the park and is the central lifeline of the park. In the northwest section of the park are the Silvertip Mountain Icefields - hard to access, nice to look at from the air. And in the southeast corner of the park is Ross Lake.

However... the park is allot more than these 3 natural features. The park is vast and many parts of the park are remote with many creeks, valleys, meadows and mountains. Some are accessible and most are not.

The facilities and outbuildings in the Skagit Park include drive in campgrounds, wilderness campsites, day use picnic areas, pit toilets, playground and a boat launch.

There are 3 main campgrounds in the park. The campgrounds include the Silvertip, Ross lake and a staging area for horseback riders with a campground near Whiteworth Meadows.

There is one developed day use picnic area and it is located near the sandy beach and campground on Ross Lake in the south end of the park. The day use area includes picnic tables, pit toilets and a cement boat launch for canoeing, fishing and kayaking.

Many arrive in the park for the opportunity to explore the many recreation trails leading into the remote mountains and valleys. There are easy - going trails, as well as, challenging multi day adventures. Some trails explore into the neighboring parks.

Throughout the park are many species of wildlife. It is important to watch for wildlife and keep your distance. never, ever feed the wildlife as you are asking for trouble. Some of the wildlife sightings in the park include deer, bear, elk, moose, cougar, coyote, wolf, beaver, chipmunk, great blue heron, kingfisher, eagle and owl.

Explore Skagit Valley Provincial Park near the Village of Hope, BC, Canada in the Fraser Valley Area of British Columbia, Canada.