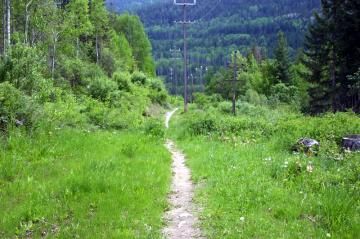 Railgrade Trail is a biking and hiking trail connecting the community of Rossland, BC with the village of Warfield, BC, both are located in the Kootenay region of British Columbia, Canada. The historic trail was once the railway line servicing the Rossland mines and the steamships stopping in at Trail Creek Landing.

The old railway corridor was in operation until the early 1900s. Today, the community of Rossland has transformed the historic route into a 7.1 kilometre connector trail popular for year round recreational activities including hiking, mountain biking, cross country skiing and snowshoeing.

Most enjoy the route downhill from Rossland to Warfield. From Warfield there is a bus service with bike racks that runs bikers back up the hill to Rossland. The total downhill route enjoys an elevation change of 330 metres.

The Railgrade Trail is a single track easy-grade recreation route that runs straight except for a few wicked switchbacks. One switchback, turns quickly to the left with an alternate route leading straight through which was once a turn-around route for trains. There is another switchback that veers left sharply again. The entire trail is very well signed and marked.

How To Get ToRailgrade Trail, Rossland

:
How to Get Here: Travel to the community of Rossland, BC. The west trailhead is located at the end of Union Street in Rossland. The east trailhead is near the maintenance yard in Warfield, BC.