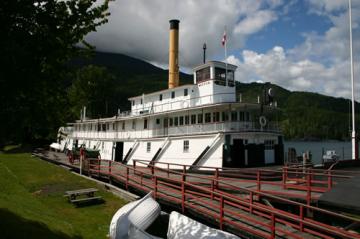 SS Moyie Heritage Site is a paddle wheel passenger steam vessel from the early 1900's situated on the shores of Kootenay Lake in the community of Kaslo, BC which is in the Kootenay region of British Columbia, Canada. The sternwheeler is the oldest of its kind in the world!

The SS Moyie is recognized as a National Historic Site and a BC Landmark. The well maintained and restored paddle wheeler is a historic museum. Inside are displays of pictures, artifacts and models depicting the history of life on Kootenay Lake in the early 1900s. Self guided and guided tours are available. Hours of operation change with seasons.

The SS Moyie was first launched from Nelson, British Columbia on October 22, 1898 by the Canadian Pacific Railway. Its run on Kootenay Lake lasted 59 years until 1957. After dry dock, the community of Kaslo acquired the vessel. Soon later restoration began and a museum was created.

The SS Moyie and her sister ships were an important part of life in the region in the 1900s because, at the time, there were no roads and trains in the area. In the early days, the Moyie was the heart of the region and the only transportation link on the lake connecting communities.

The main order of the day for the Moyie was transportation of people and goods to isolated points on the 100+ kilometre Kootenay Lake. The job description also included pushing rail car barges, carrying fruit crops, hauling freight and delivering the mail. The sternwheeler also acted as an attraction. On occasion the Moyie would provide moonlight cruises, picnic events, holiday cruises and special trips of celebration. 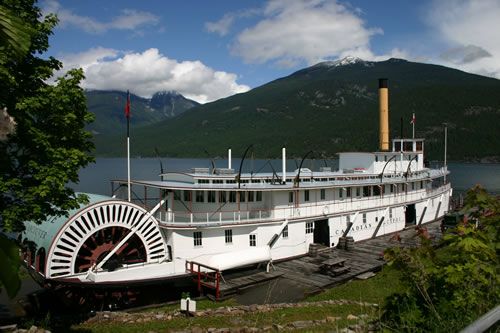