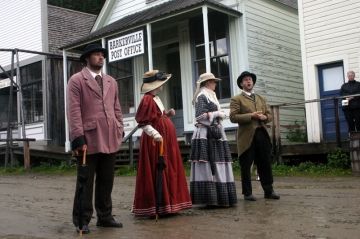 Barkerville Historic Homestead in North Cariboo-Chilcotin Region, British Columbia, Canada is British Columbia's most popular historic mining town located on the Cariboo Gold Rush Trail made popular in the late 1800s. The historic mining town of Barkerville is located on the Heritage Highway (Hwy 26) in a forested region of the Cariboo at the base of the Conklin and Waverly Mountains located east of the communities of Wells and Quesnel, BC, Canada.

The discovery of gold by Billy Barker in 1862 attracted many to the region in the hopes of making it rich. Soon later, many followed Barker to the area via the Cariboo Gold Rush Trail. This was not, just any transportation trail either, it was an engineering marvel at the time referred to as the "Eigth Wonder of the World".

Miners, immigrants and fur traders - in the thousands - started arriving in the bustling gold town known as Barkerville. So many arrived in the mining community between 1862 to 1870 that Barkerville, quickly, became the largest city north of San Francisco and west of Chicago, USA. A fact, hard to image in todays world.

The mining town flourished for years until a fire broke out in 1868 and the towns people were forced to rebuild. A second gold rush in the 1930's, briefly, revitalized Barkerville but the community was fading fast. In 1958 the gold mining community became a heritage site and Barkerville was reborn again.

Today, Barkerville is a popular sightseeing tour located at the end of Hwy 26 (The Heritage Highway). But it is not the only attraction in this part of British Columbia worth exploring. Also located on the Heritage Highway is the Bowron Lakes Canoe Paddle Route and another heritage site known as Cottonwood House.

The gold mining community consists of over 100+ heritage buildings. Buildings like a school house, a jail, a post office, a telegraph office, some settler homes, a carriage house, a church, a saloon, a hotel, a chinese mercantile store, some miner cabina and newspaper office to name a few. To make the experience all seem so real - actors roam the streets freely in period customes.

The Barkerville heritage site is best viewed in two ways. Both on foot. Some visitors decide on a self guided tour exploring history at their own pace while others like to time their arrival with the interpretive tour. A trip down memory lane following the actors down Main Street. The later is full of stories and folklore and by far the preferred tour.

Barkerville is a working heritage town. Onsite there is a selection of services operating during summer season like restaurants including the Lung Duck Tong, Gold Field Bakery, Wake Up Jakes and the House Hotel Coffee Saloon. Explore Main Street further by visiting BC's 8th oldest working Post Office with full postal services, a watchmaker shop with period time pieces, a live stage show in the local theatre and a general store with a candy selection kids would hug you for.

Treats for adults include the Kwong Sang Wing Chinese Store with medicinal herbs and wines and the C. Strouss & Company General Merchant Store with cheeses, dry goods, jams and jellies. A visit to the photography shop provides the whole family an opportunity to dress up in period clothing for a picture. And better yet, rent the custome for the day and play a local while exploring Barkerville.

Much to see and do when stepping back in time. Some like to explore the Cariboo Gold Rush Trail on a horse drawn carraige ride. Others enjoy some quality time panning for gold with a miner. While some like to stand back and watch the interpretive show of a working blacksmith at Camaron & Ames Blacksmith Shop.

A ridge hiking trail located near the large parking lot ( RV Friendly) leads to the Barkerville Cemetary. In the summer months Main Street Barkerville continues to Richfield where the local courthouse is located and Judge Begbie. Sit and watch as the law is upheld and sentences are being handed down. 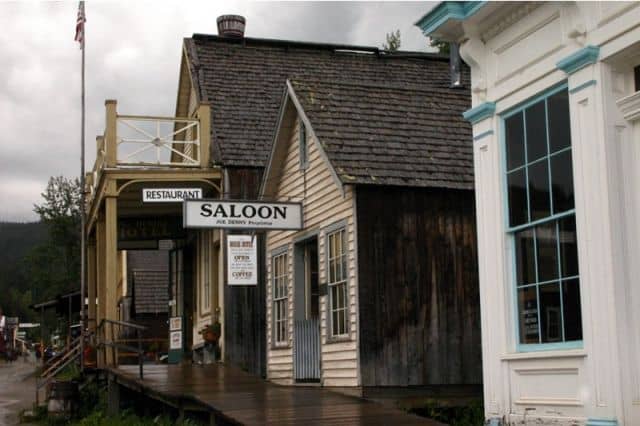 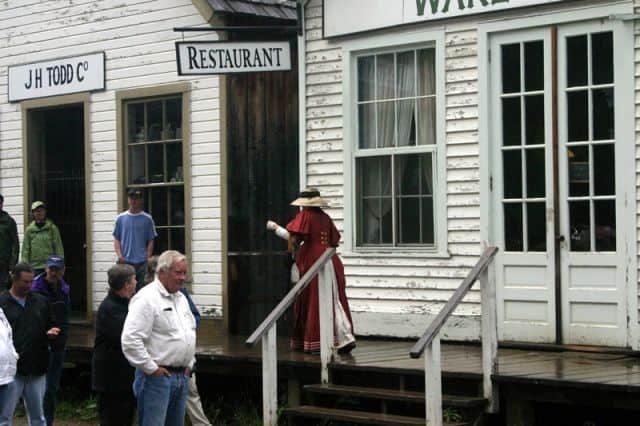