We have attended many Canada Day concerts and celebrations in our life time.  However, when talking with our friends in tourism and in the entertainment industry, we find ourselves feeling more Canadian in 2020 than in past years. And, that my friends, is a very high bar for being Canadian.

If there ever was a time to celebrate being Canadian it is now, when it means the most. Because, in these challenging times, when change is confusing, is when we as Canadians need to buckle down and celebrate the best of Canada. We need to come together and celebrate. Covid 19 does not mean we forget to have fun, live life, and enjoy being a Canadian.

It is therefore, our pleasure, to host our first online Canada Day Concert! Joining us in celebrating Canada is an ALL STAR Cast of CANADIAN MUSICIANS (Listed Below) playing SOME songs, sharing some stories and wishing you all a Happy Canada Day.  We have also included below descriptions of each artist, links to their websites, social media, and a You Tube video.

Lets get as many Canadians and international friends gathered together online for this rockin’ event and shake the internet to its core this Canada Day. To do so please share this page. Please talk it up on social media. Please attend.

Hosts : The “The Brothers of Tourism” Greg and Colin Girard

Program is a product of the EH? Travel Marketing Group (www.ehCanadaTravel.com)

All Star Line Up of Canadian Musicians

Ben Klick is well known for his guitar-driven, modern country sound  with his own unique traditional country music twist. Ben has been an award winner all his life and continues to be recognized as a top quality country entertainer. Winner of 4 British Columbia Country Music Awards, 5 International Country Music Awards, a Top 40 Under 40 Business Excellence Award, Young Entrepreneur of the Year Award recipient, and an Okanagan College Distinguished Young Alumni.  Website | Facebook | Instagram | You Tube

Me and Mae – Country Rock Band

Me and Mae is the quintessential old school country rock band with a rockish sound. The band is known for their big vocals (think Eagles) and their southern guitar artistry (think Lynyrd Skynyrd). This fast up and coming Canadian band are winners of the BCCMA Ray McCauley Horizon Award and Group of the Year two years in a row. Website | Facebook | Twitter | Instagram | You Tube

14 critically acclaimed CDs to his credit. Kenny Hess has also been nominated for Canadian Country Music Awards, and has won several BC country music awards including Male Vocalist of the Year, and Album of the Year. Kenny is the 8 time Traditional Country Artist of the Year and in 2010 Kenny was honoured with the Entertainer Life Time Achievement Award. In 2015 Kenny was inducted into the Country Music Hall of Fame. Website | Facebook

Nigel McKenzie is part of the Nigel Mack & The Blues Attack Band. Raised in Saskatoon Saskatchewan and now based in the “Blues Capital of the World” Chicago, IL – Nigel Mack & the Blues Attack have toured all over North America, Europe and headlined top blues venues throughout the world.  Website | Facebook | You Tube

Mike was named the BC provincial Champion 4 times, placed in the top 3 at the Canadian Grand Masters Fiddling Championships, the best finish ever for a BC fiddler to date. He has played with many distinguished and well respected artists like the Edmonton Symphony Orchestra, Alan Jackson, Merle Haggard, Shania Twain, Ian Tyson, Randy Bachman, Johnny Reid and Luke Bryan. Website | Facebook | You Tube

Karen Lee Batten is the recipient of 6 BC Country Music Awards for Female Vocalist of the Year. Karen was a Top 10 finalist on Canadian Idol in 2003, and went on to release her debut album Every Moment in 2006. Her last album, Cause a Scene, was released in June 2014, and hit #1 in Canadian album sales and #40 on Billboard Soundscan in the first month. Website | Facebook | You Tube | Twitter

New up and comer Canadian songwriter and artist Aaron B. Thompson. Aaron’s sound has been described as a mix of Damien Rice with Scott Helman. Aaron’s soulful and heartfelt sound has been recognized as a cross between folk and indie rock. Website | Facebook

Ed is a world renown Cree musician and artist who hails from the Ahtahkakoop Cree First Nation in Saskatchewan. Ed is considered a very talented multi-instrumentalist, singer-songwriter, and story-teller. Ed’s performances keep you jumping as he nails down his blazing guitar solos, foot stomping fiddle and his haunting flute. Ed entertains both with song and story keeping with his Cree humor and philosophy. Website | Facebook

With Special Guest Ice Bear – Ice Bear’s huge public art works (created between 1992 and 2001) have been extensively covered by local media, been front page photos and TV and newspaper headlines several times. Chris has also received the 1999 Community Arts Award runner up prize for the contribution he and his public art made to the Capital region.  Website | Facebook

ILL TONE is a high-energy hip hop artist from Vancouver Island, Canada. He has toured in 9 countries, appearing on venues with such acts as Tech N9ne, Xzibit, Talib Kweli, Rakim, Maestro Fresh Wes, Snak the Ripper, Merkules and Pete Rock & CL Smooth, among others. Website | Instagram | Facebook | You Tube
(Video contains some sensitive content and profanity) However no profanity content will be on our show.

Singer and songwriter, Bobby Garcia, is another up and coming country music artist to watch. Already playing festivals throughout British Columbia, Bobby enjoys performing his original songs and the outlaw side of country music with his band Six More Strings.  Website | Facebook | You Tube

Jackson Hollow is a newly-formed 4 piece bluegrass band. And man, can this band play and sing. The band are winners of the BC Country Music Association Traditional Country Artist of the Year 3 times. Website | Facebook

We first experienced the southern country sounds of the Donny Grubb Band at the Rockin River Music Festival in 2018 in Merritt British Columbia Canada. Donny  hails from the Hitching Post in Apache Junction Arizona, United States of America. Donny plays venues and festivals in North America and also has a You Tube show where he sits down with the musicians who drop by to play at the Hitching Post.

International Birthday wishes sent to Canadians from our friends in the United Kingdom and Australia.

And we are proud to introduce you to Whitney Williams who sings O Canada. Some of you may recognize Whitney as she has sung the anthem at the opening of some of the Vancouver Canuck games in the National Hockey League (NHL). 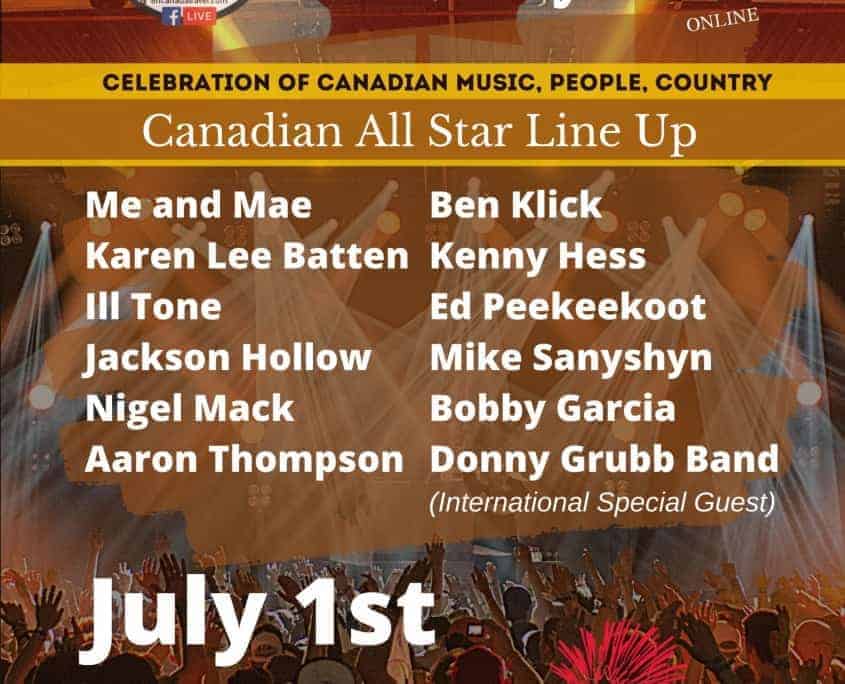 “Leave No Tourism Business Behind”

FOLLOW US TOO WOULD BE A CANADIAN THING TO DO: @ehcanadatravel

Greg Girard is a co founding brother of the award winning adventure and travel website and blog ehCanadaTravel.com. Greg is also a top ranked Canadian travel blogger who enjoys public speaking, and working with as many small and rural Canadian communities as possible. Greg is an avid outdoor enthusiasts and amateur photographer who enjoys backpacking, road trips, wilderness camping, snowboarding and what he calls hacking (what others would call golf).