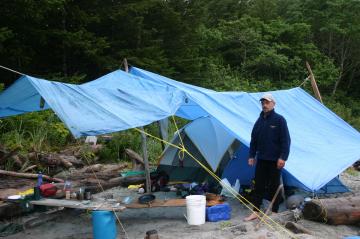 Previously the Cape Scott Trail hike was a "there and back" route, referring to the lighthouse and back. With the addition of the North Coast Trail the route becomes a one-way backpacking adventure. The route measures over 46 kilometres long and consists of trekking through remote rainforests, crossing rivers, wetlands, bogs, marshes and sandy beaches. However, it is the often endless series of ladders which leave a lasting impression.

The first section of the North Coast Trail, when starting from Nissen Bight, starts from Nissen Bight and ends at Shuttleworth Bight. The trail covers 5.2 kilometres of developed hiking trail and then 5.7 kilometres along an old settlers trail and then finishes with 8 kilometres along a beach trail. Along this stretch of trail there is a cable car crossing at Stranby River and camping facilities located at Laura Creek and Shuttleworth Bight.

The second phase of the North Coast Trail extends from Shuttleworth Bay to the pick up point at Shushartie Bay. This phase is considered difficult. The second phase of the route includes 6.6 kilometres of beach walking and then 5 kilometres leading to Cape Sutil and then 13.5 kilometres of exploring through rainforests. This section includes a cable car crossing over Nahwitti River and a water taxi at Shushartie Bay.

The backpacking trail provides a wilderness experience for the ages. Along the route one might experience wildlife sightings including Bald Eagles, Oyster Catchers and, sometimes, Black Bears, Cougars and Wolves. Because the area is a shared environment with Black Bears and Cougars, do keep your wits about you and be aware of your surroundings.