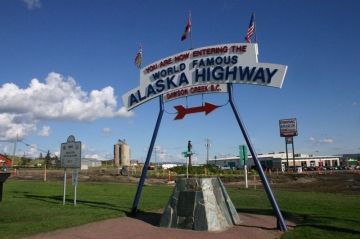 Alaska Highway is one of the most historic, scenic and globally recognized driving routes when traveling through British Columbia, Canada and the Yukon Territories. The Alaska Hwy route follows a scenic 2,451 kilometre (1523 mi.) paved road from Mile "0" in Dawson Creek, British Columbia and ends in Delta Junction, Alaska, U.S.A. It is a famous highway recognized as the "16th Wonder of the Engineered World".

The Alaska Highway is divided into three driving sections. Section 1 travels approximately 300 miles from Dawson Creek, BC to Fort Nelson, BC. Section 2 travels 335 miles from Fort Nelson, BC to Watson Lake in the Yukon Territories. Section 3 travels 888 miles from Watson Lake, Yukon Territories to Fairbanks, Alaska, USA. Along the Alaska Highway are distance markers for navigation. They are small white signs identified in miles not in kilometres as miles was the measuring stick of the day.

In 1942, the Canadian and US Governments teamed up together to construct a transportation and military route connecting Alaska with the rest of the USA. A move that came about because of the bombing of Pearl Harbour in 1941 forcing both countries to tighten up their North American borders from future attacks by the Japanese.

Because of the harsh wilderness country, the construction of the massive transportation route was no easy task. It took over 7 regiments of American engineers totally 11,000 men, 16,000 Canadians and American civilians and over 7000 pieces of equipment to successfully carve a route through some of Canada's toughest terrain exposed to some of the harshest elements. On November 20th, 1942 both governments met at Soldier's Summit located at "Mile 1061" on the Alaska Hwy to cut a ribbon officially opening the highway.

Over the years some of the corners have been smoothed out. Some sections of the highway have been rerouted, resurfaced and replaced. One such section is the historic curved wooden bridge spanning over the Kiskatinaw River near Dawson Creek. The route is referred to as the Old Alaska Highway now and it is worth checking out.

The highway is one of Canada's most memorable driving routes to explore. A route that is as scenic as they come when visiting Canada. At any given moment, on any given day, the local wildlife may appear on the side of the road. Some of the wildlife seen along the route include deer, caribou, bison, bears, wolves, moose and more.

The entire route includes trips through deep valleys, over mountains, around lakes and over hundreds of rivers and creeks. There is over 100 major bridges and over 8000 culverts located along the historic route. Pink Mountain at "Mile 143" is one of the highest points along the BC section of the Alaska Highway. The highest point is Summit Lake located along one of the the most scenic sections of the Alaska Highway from Fort Nelson, BC to Watson Lake, Yukon.

Two of the highlights to explore between Fort Nelson, BC to Watson Lake, Yukon are the Liard Hot Springs and one of the most beautiful lakes - Muncho Lake. The highway follows the banks of this green-blue lake for about 12 kilometres (7 mi.).

The entire Alaska Highway route is well marked with distance markers and interpretive signs. Each sign tells a piece of the story pertaining to the construction of the highway, the historical events of the time, the geography and about the people and places who contributed to the success of the project.

The Alaska Highway is a scenic journey. There are many pull outs along the highway. Some pull outs provide an opportunity to enjoy a picnic or a fantastic view while others provide a spot to simply check your trailer or visit a washroom.

When driving the Alaska Highway always keep to the right on corners and when going uphill. Always be alert because some people like to drive faster than what is posted and the highway is a transportation route for large logging trucks. The towns along the route include many of the amenities required by travelers like gas stations, accommodations, restaurants and ATMs.

Along the driving route is a great selection of provincial and private parks and campgrounds for tenters and RVs. Most of the parks cater to both, while some also provide walk-in wilderness campsites for the backpackers and hikers. Some of the more popular parks on the Alaska Highway in British Columbia include Stone Mountain, Muncho and Moberly Lake Parks.