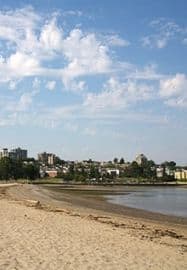 Kitsilano Beach is located in the City of Vancouver, British Columbia, Canada near Burrard Street Bridge. Kitsilano Beach, "Kits" as referred to by the locals, is one of the more lively and crowded sandy beaches in the Metro Vancouver region.

Kitsilano Beach is 1of the 10 sandy beaches spanning a total of 18 kilometres (11 mi.) located on the coastline of English Bay in the City of Vancouver. Some say "Kits" is one of the nicest sandy beaches in the region. The beach is white, long and enjoys great views of the coastline.

Some also say Kitsilano Beach is the "Venice Beach of the North" therefore it is a beach which attracts an active younger crowd and, unfortunatey, some "posers" too.

"Kits" Beach is on the outskirts of the Kitsilano Neighbourhhood and it is easily accessed from the Seawall Pathway- a popular 22 kilometre walking, biking and jogging urban path.

The beach is within easy walking distance from the downtown core of Vancouver and many of the trendy restaurants, pubs and bars in the region. In many ways "Kits" Beach enjoys an activie nightlife too.

Some of the services and amenities enjoyed at "Kits" Beach include vendors serving food and drink, washrooms, outdoor heated pool, playground, tennis courts, beach volleyball courts and lifeguards on duty between the summer months of May and September.

The views from "Kits" beach are some of the best beach waterfront views looking out onto English Bay. On clear day one can view the North Shore Mountains, City of Vancouver and Stanley Park. And on every other sunny day one can people watch.

How To Get ToKitsilano Beach

kitsilano-beach
PreviousNext
No reviews yet for Kitsilano Beach.