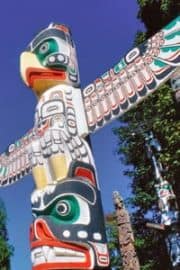 Stanley Park is located in the City of Vancouver, British Columbia, Canada. The park measures over 400+ hectares (1000+ acres) and it is the most visited park in the Metro Vancouver region (Greater Vancouver Regional District).

The three main natural attractions in the park include Second Beach, Third Beach and the Seawall. Second and Third Beaches are 2 of the 10 sandy beaches spanning a total of 18 kilometres (11 mi.) located on the coastline of English Bay in the City of Vancouver.

The park is home to culture, nature, tradition and activity. Some of the many activities enjoyed in the wilderness park include swimming, walking, jogging, hiking, rollerblading, biking, tennis, sunbathing, cycling, picnicking, birdwatching, boating, sailing, sightseeing, cricket, lawn bowling and kayaking.

The natural landmarks in the park include the Lost Lagoon and fountain (on the left at the main entrance), Siwash Rock (rock pillar), Hollow Tree, Prospect Point (lookout viewpoint) and Beaver Lake (marsh and bird sightings).

The First Nation collection of carvings and art in Stanley Park provide visitors some insight into the history and culture of the First Nation people of British Columbia, Canada. Some notable art includes the Coast Salish Gateway (carved arches), the totem pole garden (9 totem carvings) and the "Raven - Spirit of Transformation" (6 ft high wooden carving). The totem poles at Brockton Point attracts some of the biggest tour groups to the park.

For the family and children there are tours and attractions like riding a miniature train, sandy beaches, children playgrounds, spray parks, bike rentals, duck ponds, swimming pools, the Vancouver Aquarium and some day use picnic sites.

The Seawall on the waterfront of Stanley Park is one of the most popular sightseeing pathways in the City of Vancouver, British Columbia, Canada.

The entire Seawall measures 22 kilometres long (14 mi.) and stretches from Coal Harbour to Kitsilano Beach passing through Stanley Park and False Creek. The pathway connects to over 15+ parks, beaches and green space areas... and many other attractions and venues.

The Stanley park portion of the pathway measures 8.8 kilometres and may be the most popular section of the Seawall for walking, sightseeing, jogging, biking, inline skating and rollerblading. The Seawall is wheelchair and stroller friendly.

Connecting to the Seawall are over 27 kilometres of wilderness trails which travel inland exploring the park grounds and connecting with various landmarks and attractions. The trails are heavily forested and follow gravel and bark-mulched pathways. Most of the trails are level, easy going and suitable for all ages and fitness levels.

Located in the southwest corner of Stanley Park is the pebbled, sandy and sometimes rocky Second Beach. The beach is easily accessible near the entrance of the park off of Beach Avenue and from the Seawall.

Second Beach is the more family oriented beach of the two beaches in Stanley Park. A big draw for families is the heated outdoor pool, spray park and playground. The pool is situated on the waterfront so you can just imagine the great views.

Other services located onsite include a food vendor serving drinks and snacks, washrooms, picnic shelter (must reserve), change rooms and a lifeguard during the summer months (May to September). Parking fees apply.

Located on the western side of Stanley Park is the sand covered Third Beach. The beach is easily accessible from the Seawall and from the Georgia Street entrance. Third Beach is considered the more popular beach of the two by adults.

The location of the beach and the lack of children provides visitors a quieter surrounding therefore it tends to attract smaller, older crowds.

Some of the services located at Third Beach include a food vendor, change rooms, washrooms, picnic area and a lifeguard on duty during the summer months between May and September. Parking fees apply.

How To Get ToStanley Park

:
How to Get Here: Stanley Park is serviced by bus, shuttle and horse drawn carriages. However most arrive on foot, bike or vehicle. When arriving by vehicle prepare for pay parking.

stanley-park-totems
PreviousNext
No reviews yet for Stanley Park.