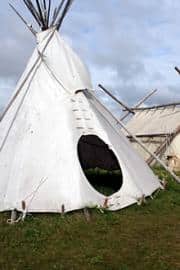 The Rocky Mountain House Historic Site protects and preserves the history, remains, artifacts and memories of the fur trading forts and details the life and struggles of voyageurs like David Thompson and the First Nation people of that time. The historic site covers over 228 hectares (564 acres). The grounds of the historic site are located on the the same grounds as the actual forts during that period.

Between the years of 1799 and 1875 there were 5 fur trading forts built on the banks of the North Saskatchewan River. The construction of the forts used a technique known as "Red River Frame Construction". The first forts to be built were in 1799. The Northwest Trading Company and the Hudson Bay Company each built a fort to compete for the fur trading business of the region. The Hudson Bay Company fort was named the Rocky Mountain House and the Northwest Trading Company fort was named Acton House. The first forts were built to create trade with the Kootenay First Nation people. This never did materialize. In 1821 the forts merged to be more competitive and , together, they were named Rocky Mountain House. Once the merge was completed fur trade boomed but not with the Kootenay First Nation people. Instead trade developed with the surrounding First Nation villages of the Blackfoot, Peigan, Blood, Stoney, Sarcee, Gros Ventre and Cree First Nation people. The last fort at Rocky Mountain House was abandoned in 1875. The fur trading forts traded supplies like pots, guns and cooking utensils for furs. The voyageurs would then embark on a 5200+ kilometre trek from the forts of Rocky Mountain House to Montreal, Quebec in an effort to deliver the furs and return with more supplies. The trek was often a race against the winter elements. There are 3 walking trails on the grounds of the the Rocky Mountain House Historic Site. The Chimney and David Thompson Trails detail fort life and the people of that period. The Bicentennial Trail connects the fort with the community of Rocky Mountain House. The Chimney Trail explores the site of the first two forts. The original chimneys and some foundations are still visible and on display. Located on the trail are artifacts including a Red River Cart, York Boat and a graveyard. Each with signs and plaques detailing the history of the attractions. The David Thompson Trail details the site of the most recent forts and the life of David Thompson. David Thompson is largely responsible for mapping out the western interior of Canada. The interpretive trail visits a canoe exhibit, a tipi village, a fort construction exhibit and a bison paddock with lookout towers and viewing platforms. The Rocky Mountain House Historic Site provides guided tours and educational programs to the public. There is a large Visitor Centre, a picnic area, an RV friendly parking lot, a play fort for children and even a David Thompson puppet show.

How to Get to the Historic Site: