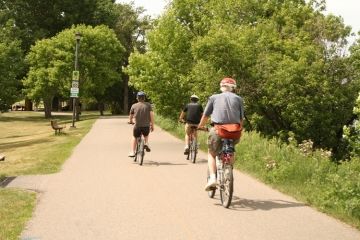 Bow River Pathway and the Elbow River Pathway are two of the most popular recreation trails and sightseeing routes located in the community of Calgary, Alberta in the Southern Alberta region of Canada.

The popular river pathway system follows both banks of the Bow River and one bank at a time, crossing foot bridges, on the Elbow River. In total the Calgary trail network measures approximately 630+ kilometres. It is said to be the largest and longest paved urban trail network in North America.

The Bow River Pathway, basically, runs in a east-west direction and then turns north-south. In the west the trail begins near Bowness Park and travels east connecting with the Prince's Island Park in the centre of Calgary.

The community of Calgary has over 80 square kilometers of parkland and public green spaces. Much of it is connected to the city trail system.

The pathway attracts many activities to the Bow River and Elbow River area. Some of the activities most popular while exploring the pathways include walking, hiking, jogging, biking and roller blading.