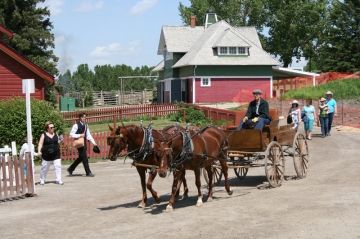 Heritage Park is a historical pioneer village and sightseeing destination located southwest of the community of  Calgary, Alberta, Canada in the Southern Alberta region of Canada.

Heritage Park is a working village, hosted by pioneer actors, measuring over 51 hectares (127 acres) along the shores of the Glenmore Reservoir. Some say it is the largest historical working village in Canada.

The Calgary sightseeing attraction depicts the history of the early pioneers who first settled in Western Canada between the years of 1864 and 1940.

The heritage village park is divided into sections based on historical themes and time periods. The sections include the Heritage Town Square, the 1860s Hudson Bay Trading Fort, the 1880s pre-Railway Settlement and the 1910 Pioneer Village.

The Hudson's Bay Fort is a fur trading post with replica log buildings, authentic artifacts and pioneer actors going about their day as if it was still in the 1860s. Outside the walls of the fort is the Our Lady of Peace Mission (1875) and a Buffalo Rubbing Rock.

The 1880s pre-Railway Settlement tells the story of the coming of the railroad. Some of the historical buildings include Laggan Train Station (1891), Livingston House (1883), Millarville Ranchers Hall (1895), Drew's Saloon (1886), MacKay Cabin (1884), Gleichen School (1888) and a First Nation tipi encampment.

The main sightseeing destination in the Heritage Park is the 1910 pioneer village. The streets are a buzz with horse wagons, horse carriages and pioneer actors. There are historical buildings, standing side by side, housing unique stores, working shops and services typical of that era.

The main attractions in the park will depend on your own needs and wants - as everyone is different. But In general terms, some of the more high profile attractions include the boat cruises on the S.S. Moyie paddlewheel boat, the giant ferris wheel and carousel in the antique midway and the steam train rides exploring the outer rim of the park. All three provide views of the Glenmore Reservoir and are good sightseeing and interpretive tours.

The Heritage Park Historical Village is a paid admission park. At the entrance of the park are opportunities to sign up for interpretive guide groups and educational programs. It is also a site for large events, festivals and celebrations.