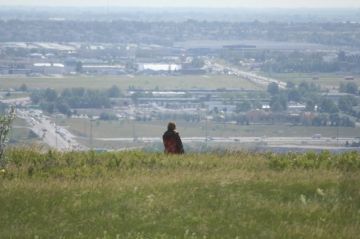 Nose Hill Park is a popular recreation and sightseeing destination located in the community of Calgary, Alberta, Canada in the Southern Alberta region. The park is located in the northwestern section of the city.

Nose Hill Park is a one of the largest municipal parks in Canada measuring over 1129 hectares ( 2790 acres ). It is a natural environmental area encompassing a large hill covered in native grasslands and rolling coulees.

To explore the natural park there are a series of walking trails. The trails crisscross and loop together leading to natural viewpoints. Many provide an almost 360 degree view of the surrounding Calgary, Alberta  area.

Most of the trails on Nose Hill are gravel and dirt, single track paths. Most are generally easy going routes but there still are a few which go up and down.

There are some trees, especially on the north side, providing cover in the park. Most notably there are Trembling Aspen trees. Most of the trees are grouped together in small groves while some face the elements standing alone.

Many of the trails provide little tree cover and therefore are exposed to the weather. There are trails which are especially exposed to high winds and intense sunshine for long periods of time. It would be advised to wear a hat, sunglasses and bring water and sun screen.

There are off leash dog areas on the hill as well. However... while on the public trails dogs are required to be on a leash at all times so to not venture off the trail and onto the sensitive grassland areas.