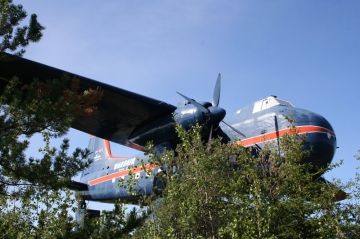 Bristol Freighter Historical Airplane in the Northern Frontier Region, Yellowknife, Northwest Territories, Canada is a large plane suspended high in the sky welcoming you to the community of Yellowknife. The plane, is actually an air freighter - it is blue, suspended in the air on a pole and is easily spotted from the highway next to the "Welcome to Yellowknife" sign

There is a short walking path, with stairs, leading to the Bristol Air Freighter where there is also a picnic area. The plane is suspended in the air surrounded by red bedrock referred to as the Canadian Shield. At one time there were some real funky stone fireplaces erected on the site... but time and vandalism have taken there toll on the stone monuments and all that is left are the crumbled foundations.

The Bristol Air Freighter which dominates the airspace above your head was donated to commemorate the services provided by the fleet of freighters during the development era of the Northwest Territories, Canada. The freighters were often used to transport supplies and people to remote trading posts, schools, mines and oil sites.

The Bristol Freighter at the entrance of the community of Yellowknife was retired in 1968. It was the first wheeled plane to touch down at the North Pole. An event documented in May of 1967.

East of the Bristol Freighter is a 2.5 kilometre hiking trail which explores through a boreal forest and the Canadian Shield. The trail eventually connects to the Frame Lake trail system on the west side of the lake. The hiking trail passes by Jackfish Lake and crosses behind a cemetery.