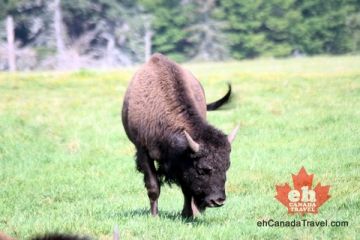 Fort Smith is the gateway community to the Wood Buffalo National Park of Canada. The park, located in the northern boreal forest of Canada, is a popular wildlife, conservation and recreation destination year round. Established in 1922 the Wood Buffalo National Park is Canada's largest National Park . It is measured to cover 44,800 square kilometres and was first established to protect the wild herds of wood buffalo. Today, the park is still best known for its wildlife but now recreation is a big park of exploring the park.

The Wood Buffalo National Park is home to the largest free roaming herd of wood bison. Last count was 3500+. The park also protects other important habitats like the last natural nesting grounds for the endangered whooping crane.. and then there are the Salt Plains and the Mackenzie-Athabasca Delta.

In 1983 the park was designated a UNESCO World Heritage Site. At the time is was the 8th site in Canada to be named to the protected list. The park was recognized and protected for its efforts in protecting bison and the sensitive eco systems in the park.

Some sections of the park are so protected that they can only be visited from the air. One such example is the last natural staging area for the endangered whooping crane. It is a landscape of connecting bogs, creeks, lakes, wetlands and marsh. The protected area is deep in the hard-to-access northern section of the park.

The Wood Buffalo Park is home to other wildlife also. The massive park includes wolves, bears, fox, lynx, marten, beavers, moose, wolverines and many species of birds like sandhill cranes, owls, eagles and peregrine falcons. The Peace-Athabasca River Delta is one of the largest fresh water deltas on the globe. It is an important nesting and feeding grounds for migratory waterfowl in North America.

There are a few hiking trails that are accessed by a gravel road. And then there are the remote hiking trails which are only accessed via floatplane or canoe. Some of the easy access day hikes in the Wood Buffalo Park are located in the Salt River area which is located on the way to Pine Lake. The trails include the Karstland Loop (750 metres), Salt River Meadows Loop (1.3 kilometres) and the South Loop-Salt Pan Lake (9 kilometres) and North Loop-Grosbeak Lake (7.5 kilometres).

Canoeing can be easy or it can be all about whitewater when paddling in the Wood Buffalo Park. There are easy lake paddles like Pine Lake. And then there are the white water adventures on the Slave, Peace and Athabasca Rivers. These are the big boy river routes for experience paddlers.