Did you know that Grasslands National Park, West Block, the only place in Canada where the black tailed prairie dog exists in the wild?  These highly social animals are actually from the squirrel family and are described by Parks Canada as a "key component of the grasslands prairie ecosystem." The park is home to several prairie dog colonies or "towns", and one can watch them without disturbing them with the two magnification viewers available at one area along the self-guided ecotour route.  The high pitched barking sound they make means they are alerting others to your presence, or the presence of a predator, such as a fox, coyote, or perhaps the endangered black-footed ferret which has been undergoing slow reintroduction into the Grasslands Park since 2009.  If you happen to catch them "kissing" or embracing one another, this tender moment is actually the way they recognize each other. Their antics are a favorite of park visitors, and on my visit, I stayed long into the afternoon watching them.  I had hoped to catch a glimpse of a burrowing owl which uses old vacant burrows of the prairie dog for shelter.  However, on this occasion it was not to be.  The prairie dog towns are one of my favorite parts of the ecotour in the park.  You may be also see a herd of Plains Bison as you make your way through the park! You may want to start your tour at the interpretive centre in Val Marie as we did. The knowledgeable people there were friendly and full of information on the park, safety information and info on any events that may be taking place.  I plan on spending at least one day under the stars in a tipi available at the campground in the park this summer.

If you like the prairies, you will love this park! 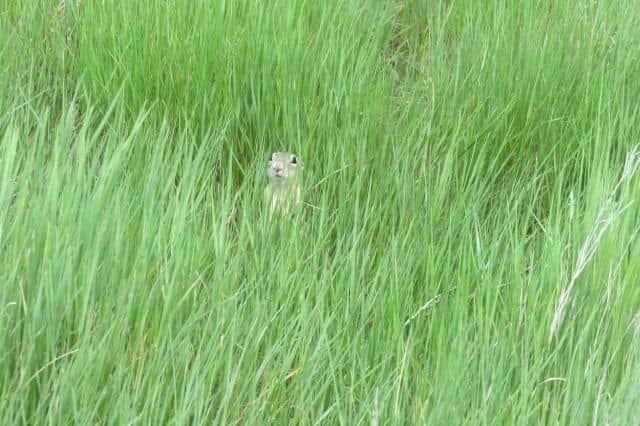