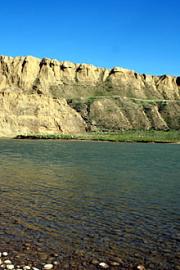 Police Point Park is a wilderness park and recreation destination situated on the banks of the South Saskatchewan River in the community of Medicine Hat, Alberta, Canada.

The 98 hectare ( 242 acre) park is a wildlife nature reserve heavily decorated in a forest of cottonwood trees with open fields of prairie grasslands. It is a popular destination for walking, sightseeing and birdwatching.

This Medicine Hat, Alberta, Canada park is part of a flood plain and is identified as a riparian area with a sensitive eco system. At one time the parkland was a NWMP (North West Mounted Police) outpost monitoring the fur trade and policing whisky.

Today, it is a wilderness park with very little human intervention located away from city sights and sounds. The lack of noise and high people traffic combined with the high volume of trees and the rich river environment - the park attracts many birds to the area.

The Police Point Park is one of the more popular birdwatching destinations in Medicine Hat for viewing song birds and waterfowl.

Connecting to the park is a paved trail and exploring the park is a series of red rock gravel, dirt and sand trails. The paved trail connects the city of Medicine Hat, Alberta, Canada to Police Point Park via the Heritage Trail System.

The side trails in the Police Point Park explore the forested park and the banks of the South Saskatchewan River. Many of the trails are loop routes. Most are very easy going, short and level paths.

The main gravel pathway leads visitors out to the bend in the South Saskatchewan River where the mighty river meets the Rose and Seven Persons Creeks.

Along the trails are information signs, lookout viewing platforms and some sightseeing benches providing some of the best views in the community of the river.

At the entrance of the park is the Police Point Nature Centre. Here they provide washrooms, interpretive guides and more information signs.

How to Get to Police Point Park

Travel to the community of Medicine Hat, Alberta, Canada. From the 2nd Avenue Bridge in downtown Medicine Hat travel north to 3rd Avenue and connect to Parkview Drive. Travel east on Parkview and turn tight on Police Point Drive and follow it to the park. Police Point Park is about 5 kilometres from downtown.