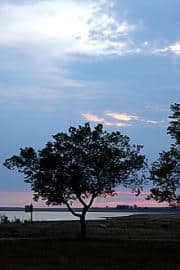 Little Fish Lake Provincial Park is a campground and birdwatching destination situated on the shores of Little Fish Lake which is located east of the community of Drumheller, Alberta, Canada.

Little Fish Lake attracts many birds to the region. Some arrive to nest, some to feed and others to rest as they migrate north to south. It is a popular birdwatching location which is remote and out of the way.

Little Fish Lake is identified as an Endangered Species Site under the Western Hemisphere Shorebird Reserve Network. It was once a popular nesting ground for the Piping Plover. Years ago they would arrive in the thousands. Today, they have dwindled to single digit numbers - during some years, zero have arrived to nest.

That is not to say there are no birds to watch because there are. Little Fish Lake is home to thousands of ring-billed gulls. Also, thousands of Canada Geese use the lake as a staging area and hundreds of California Gulls nest at the lake. For birdwatchers there are interpretive signs located in the park.

Little Fish Lake Provincial Park is very remote and private. On site there is a paid campground with minimal services. The camping area is well treed and decorated with picnic tables and fire pits. Nearby is a playground and pit toilets.

How To Get ToLittle Fish Lake Provincial Park