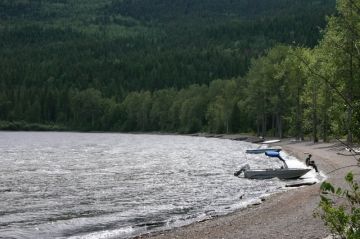 Wells Gray Provincial Park in the South Cariboo-Chilcotin Region, British Columbia, Canada is located near the community of Clearwater, BC. The provincial park is a recreation destination in the heart of the Cariboo Mountain Range covering over 540,000 hectares. It was established in 1939 and it is the 4th largest park in British Columbia, Canada. Wells Gray is best accessed from four communities outside the park boundaries - 100 Mile House to the west, Clearwater to the south and Blue River to the east.

The park consists of many geographic zones with the most notable being the Murtle Lake, Clearwater/Azure, Mahood Lake, Spahats Creek, Wells Gray Corridor and Trophy Mountain regions. Many arrive in the park planning on staying a few days or weeks with one of the local resorts while others prefer the outdoors at one of the vehicle access campgrounds. And then there is the hearty camper who prefers backpacking into the wilderness and staying in a wilderness campsite.

Vehicle access campgrounds, including the Pyramid, Clearwater, Mahood and Falls Creek Campgrounds, operate on a first-come, first-serve basis. The campsites include picnic tables and fire pits. All have pit toilets. The day use areas in Wells Gray Park include Clearwater/Azure, Mahood Lake, Spahats Creek and the Wells Gray Corridor. All have picnic tables and pit toilets, except for Spahats Creek which enjoys flush toilets.

Multi day trips provide the best opportunity to explore when in the park. The scenery is everywhere around you and there is lots of it so be selective on which natural attractions you want to visit and how you want to visit it. On foot, by vehicle or in a canoe?

Wells Gray is a wonderland of waterfalls. Many can only be accessed by a hiking trail. The effort is well worth the reward because, arguably, the park is home to some of BC's most rugged waterfalls. Some of the more popular falls in the park include the Helmcken, Crystal, Deception, Goodwin, Sylvia, Sundt and Canim Falls.

if you like spring then the high elevation alpine meadows in the park will be your cup of tea. Once the snow line rises and the meadows thaw out, the alpine flowers bloom releasing a radiant rainbow of colors. Take a plant book along on your hike and see if you can identify the following wild flowers like the Indian Paintbrush, Alpine Daisies, Avalanche Lilies or Horsehair. Best bet for best colors is Trophy Meadows and Table Mountain.

Fishing the lakes and rivers is a past time enjoyed by many in Wells Gray Provincial Park. Rainbow Trout is the catch of the day on Clearwater Lake, Barella Creek and Angus Horne Creek. While Mahood Lake is stocked with kokanee, whitefish, burbot and Rainbow and Lake Trout.. Most prefer trolling the lakes and fly fishing the rivers.

Hiking and wilderness backpacking is huge in this park because of the variety of routes available ranging from short and easy to long and steep. Some of the popular day hikes in the park include the Spanish Lake, Canim Falls, Chain Lakes, Murtle River, Whale Lake and Deception Falls Trails.

Some of the multi day backpacking adventures in the park to explore include the Wavy Alpine Trail, the Dragon's Tongue to Kostal Lake to McDougall Falls Trail, the Zodiak Peak to Azure Mtn to Goats Peak Trail, the Stillwater Route and the Huntlet Co Route to Garnet Peak Trail. Some trails include wooden huts for accommodation, most have wilderness campsites. Pack in pack out mentality is encouraged.

With so much remote and untouched wilderness areas it is easy to see why there is so much wildlife in the park. Wildlife like black bears, grizzlies, moose, mule deer, beaver, wolf, bobcat, cougar, mountain goat, lynx, otters and porcupine. Birders will be pleased to know that the wetland, marsh, lake, river and bog regions in the park attracts over 200 birds to the area.