Hooked up with an old school buddy in the Cowichan Valley on Vancouver Island in British Columbia, Canada for some historic recollection. laughs and adventure. He is a best friend of EH Team Brother Greg. He is a man of many nicknames. But since we are a family blog we will call him by his favourite nickname, not ours,  Jolly Mongo! 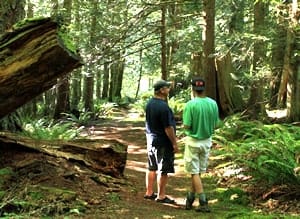 Our visit started with quips and qualms about a park behind his place. He described it as a, “Short walk,” and, “It will take only 15 minutes.”

At the time, Colin and I, were not running on all cylinders. Because of our long trip our minds were like mush.

Normally length and time of an adventure would not be a concern to us but we were exhausted from our long drive across Canada when we arrived at Jolly Mongo’s place.

The poor sleeping conditions the night before in the front seat of our jeep did not help the situation. It was a seat which would not recline because the jeep was packed to its limit. And it was a jeep which smelt like wet clothes and dirty socks.

The life of an EH Team researcher is not all roses any of the time. Nope… most of the time it is hard work with little glory under rugged conditions with little budget. Remember we are not funded by the government to the tune of millions… no… we are funded by you the advertiser and sponsor. Thank you by the way!

After arriving at our friends place near Duncan / Crofton we felt like the air had just been let out of our tires. Finally, we could rest and breath. Both, Bro and I, were secretly drooling over the couch which sat vacant. But that was for a very brief moment as I pounced on it.

Next day… we woke up with energy in our legs and razor-sharp senses for adventure. Our buddy was still telling us about a short walk behind his house called Eves Provincial Park. 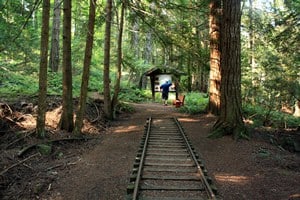 The provincial park was once home to a railway right-of-way during the 1900s. It was  used for transporting copper ore from Mount Sicker to the ocean port in, what is now, called Crofton. Throughout the park are information signs, a day use area, trails and a section of the old rail line.

We did not know Eves Provincial Park even existed?

“What, a park here? How can that be,” we muzzled. We grew up in the Cowichan Valley. We thought we knew every park and trail in the region. How naïve are we? Pretty naïve as we found out.

The walk was to take only 15 minutes and then we would reward ourselves by relaxing on a bluff and watching the sun set.

My high school buddy, Jolly Mongo, packed the chairs and some liquids in his truck. You can guess what type of liquid he packed for a reunion of school buddies. I think it is obvious.

The 15 minute walk was not 15 minutes. No… not even close. It took a group of 4 guys a couple of hours to walk a very short distance. 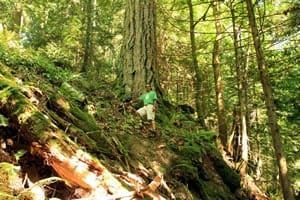 There was myself, my brother Colin, my friend Jolly Mongo (who again goes by many nicknames) and his brother from Alberta. There were two sets of brothers each with a camera and there was a lot of catching up to do which made it a slow trek. Just goes to show you when you go for a walk with the EH Team, good friends and two people with a camera there is no such thing as a short walk.

We walked and we talked. We stopped and we clicked. It seemed everything was photo worthy on this trip. I was taking photos of trees, ferns, fungi, cobwebs, trails, skies, leaves, signs, railroad tracks, flowers, bugs, friends and – of course – our EH Team model of KEEN and NPA, my brother.

The Bluff in Eves Provincial Park

Eves Provincial Park does not have many signs leading to it. Not many people know of it. But for those who want a park to themselves I cannot think of any other in the Cowichan Valley better suited for such an adventure.

For a couple more hours we sat and talked and swilled a few liquids on the bluff. The day was perfect. The company even better. The memories shared seemed endless.

An Interview With Expanse Cottages in Nordegg, Alberta