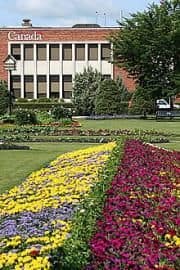 City Hall Park is a floral garden and public park destination located in the centre of the community of Red Deer, Alberta, Canada. The park is the front yard of the Red Deer City Hall building.

The land for the City Hall Park was first acquired in 1902 with plans of developing a park like environment in the community. Hard times postponed the plans until the 1950s. It was then the garden was planted and soon later monuments added like the Royal Canadian Air Force Monument in 1967.

Today, the City Hall Park in Red Deer, Alberta is a bright and colorful centre piece in the downtown core of Red Deer. The grass lawns and walking paths are lined with flower beds colored in reds, blues, yellows, oranges and purples.